Marcus Schwarzrock, national coach of the German rowing squad, and Dr. Stefan Wolf, CEO of ElringKlinger AG, share the view that only properly functioning teams can deliver top performance. With just a few months to go before the Olympic Games 2016, they met up for a chat at the Rowing Academy in Ratzeburg.

WOLF — The Olympic Games in Rio de Janeiro will be starting in just a few months. I imagine you are already experiencing that Olympics fever.

SCHWARZROCK — The Olympic Games set the rhythm for everything we do. In fact, they are the be-all and end-all. Our preparations span a period of four years, and we tend to train even more intensively in the ­run-up to the Games. Having said that, it’s im­portant to remember that rowing is an amateur sport. In the first two years of the Olympiad, our athletes should be concentrating more on their education or career preparation. We think that’s very important.

WOLF — What I find fascinating about rowing is the tremendous coordination of the athletes. I think it’s amazing to see every single movement in an eight happening at precisely the same time. Presumably more than anything else, that’s all about training together.

SCHWARZROCK — Rowing is a team sport. Having said that, to make the team, you have to show your ­individual strengths, too. Everyone has to demonstrate their skills first of all in a single or a pair. The fastest and the strongest are selected for a boat, and from then on they train together.

WOLF — As a manager, I find time and time again that the biggest challenge is to take a number of high-­performing individuals and form them into a team that can work together unconditionally. I imagine that it’s the same in your case...

SCHWARZROCK — Absolutely, and the bigger the team, the harder it is to do that. Take an eight, for example. Including the cox, that makes nine people, ­so team- building is really important. You have to work out which members of the team have which strengths and weaknesses, and that helps you to determine their position in the boat. If someone rows really well in a single, but isn’t really suited as a team player, there is of course still the single scull event (laughs). Sometimes it makes more sense to select a slightly weaker rower for the eight if that person fits perfectly into the team as a whole.

WOLF — It’s a similar situation in our company, especially in development teams that are working in ground-breaking areas such as lightweight con­struction or low-emission drive systems. These are very complex technologies for which you need the expertise of several people. While it’s true that we have individ­­ual top performers who are capable of tremendous things on their own, we can’t afford to have too many “single scullers.”

SCHWARZROCK — When you are talking about absolute top performance, the team has to work as one. There can’t be any question of emotions or power structures. Everyone has to be completely focused. Everything has to be subordinated to the goal.

WOLF — What happens if a mistake occurs even then?

SCHWARZROCK — That’s when you find out how good a team really is. Remember the World Championship final in 2011? Our quad was in the lead, and I already had my hands up in the air when one of our rowers “caught a crab” just before the finishing line. That’s what we call it when the blade of the oar digs in too deep into the water. So we ended up in second place. In spite of that disappointment, everyone took the view that “we win together and we lose together.” That approach helped to strengthen the team, and the following year we came away with a gold medal at the Olympic Games.

WOLF — For me, learning from disappointment and trying again is a prerequisite for success, in sports just as much as in business.

”When you are talking about absolute top performance, the entire team has to be completely focused. Everything has to be subordinated to the goal.“

SCHWARZROCK — Obviously physical performance and the ability to coordinate your movements are very important in rowing. At the same time, you can’t underestimate the significance of mental toughness. You have to be prepared to put yourself through the mill every day in training – we train for up to 30 hours a week just before the Olympic Games – and in competition you have to give it absolutely everything you have in every single race. That hurts.

WOLF — When we are looking for talented people, we don’t just concentrate on their qualifications and in­telligence. We also want to know how committed they are. For demographic reasons, it is getting harder and harder to find those talented people in Germany. Therefore, we have established close ties with various universities, and we try to attract young people to our company at an early stage by offering internships and opportunities to work on their final degree thesis. Some have been high-level sportsmen and sportswomen who joined us to complete the practical stage of a dual work/study course. For us the experience was very positive, because these young people were already very used to showing commitment as a result of their sport. Qualities such as self-discipline, concentration, a willingness to work very hard, and a focus on targets are all transferable into the working environment. They are the kind of values that distinguish the best from those who are simply good.

SCHWARZROCK — We have found that around 80 percent of our junior rowers actually perform better at school after they start training at a high level. They quickly learn to divide up their time more efficiently and to work in a more concentrated way.

WOLF — Does innovation also play a part in rowing?

SCHWARZROCK — It certainly does, and in several ways. On the one hand, we work with universities and research institutes to keep on improving our training methods. For example, at the moment we are evaluating a brand new approach towards the intensity of training and comparing it with our existing regime. On the other hand, boat technology has come a long way. We used to work with wooden boats; nowadays its Kevlar and carbon fiber. Modern boats are lighter and also more rigid. 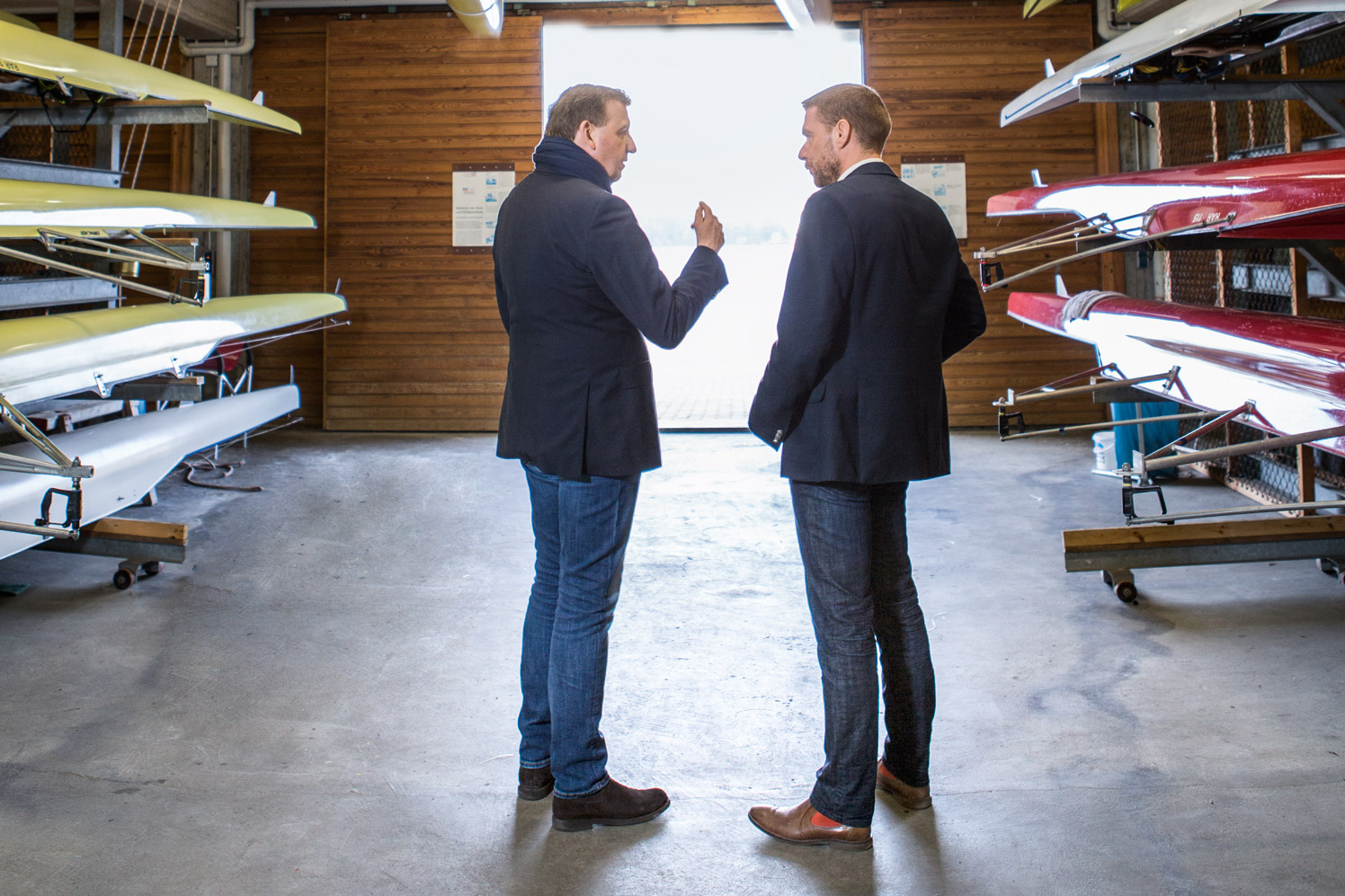 Dr. Stefan Wolf and Marcus Schwarzrock meet up at the boathouse to discuss the ins and outs of lightweight engineering – in competitive rowing and the automotive industry

WOLF — Lightweight construction is very important for ElringKlinger too. In the same way that you are replacing wood with carbon fiber, more and more we are using plastics instead of metal. That increases efficiency, because in a vehicle less weight always translates into lower fuel consumption and therefore lower CO2 emissions.

SCHWARZROCK — We have to keep making progress. After all, the competition we face internationally keeps getting stronger. Nowadays there are many more countries that are in with a chance of a medal. Of course, our strongest competitors are New Zealand, who is right there at the top, the USA, and Great Britain. As the biggest national rowing association in the world in terms of members, we’ve always aimed to be successful in all fourteen Olympic rowing categories. But that is becoming increasingly difficult. We are now thinking about concentrating our resources, although there is, of course, no question over Germany’s eights squad. 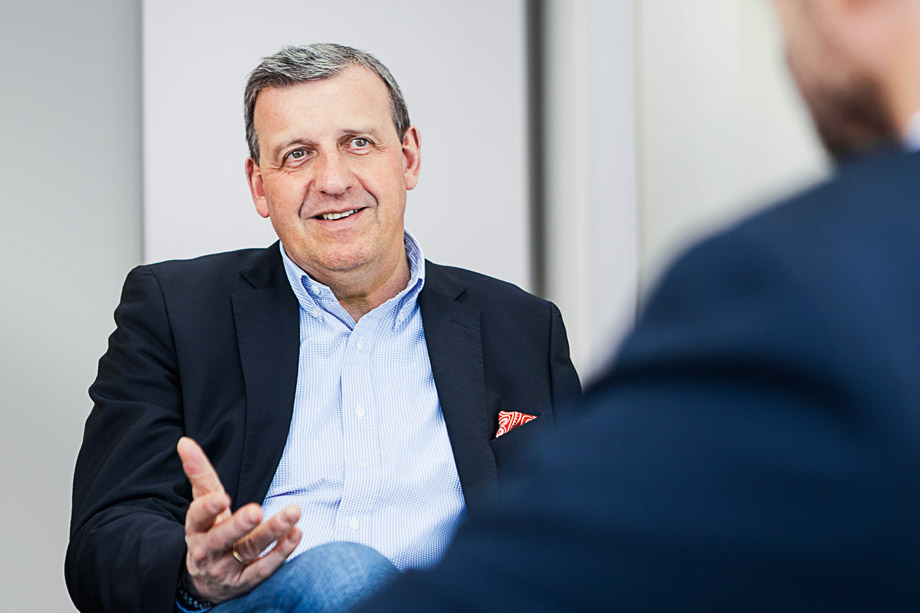 ”If we want to remain world class in Germany, we have to innovate – whether in sports or in business.“

WOLF — For automotive suppliers globalization is both a tremendous opportunity and a huge challenge. It’s true that we now have our own factories in all the world’s major automotive markets, such as North America and China. At the same time, however, various new competitors have emerged that didn’t even exist twenty years ago. If we want to remain at the top, we have to keep on improving our products and implementing innovative ideas. What’s more, our customers in the vehicle manufacturing industry are faced with ever tougher restrictions on exhaust and CO2 emissions. Our job is to develop effective solutions. If we want to remain world class in Germany, we have to innovate – whether in sports or in business.

SCHWARZROCK — I don’t want to sound as if I’m feeling sorry for myself, but I think, if anything, the problems we face in sports are even bigger than in the business world. I’m not just talking about top-level sports. I think we simply don’t invest enough in sports as part of our education system. It ought to have the same priority as other school subjects. That would benefit society as a whole. The Brits and the Americans are a good way ahead of us there.

WOLF — Yes, I noticed that during my own time in the States as an exchange student. There was a whole range of sports on offer, and it was perfectly normal to do some sport every afternoon. I think it would be very important to improve sports provision at schools. Besides its impact on our health, sports play many other important roles: young people learn to set themselves goals and to achieve them as part of a team. Talking about goals, how many gold medals is the German squad going to bring back from Rio this time?

SCHWARZROCK — Our target is to win three to five medals – at least one of them gold.

WOLF — Given what you were saying about the tough competition out there, that sounds very ambitious.

SCHWARZROCK — It is ambitious. After all, sometimes victory can depend on just a few hundredths of a second. But you have to set yourself ambitious goals if you want to achieve something worthwhile.

WOLF — I wish you every success. Thanks for an interesting conversation! 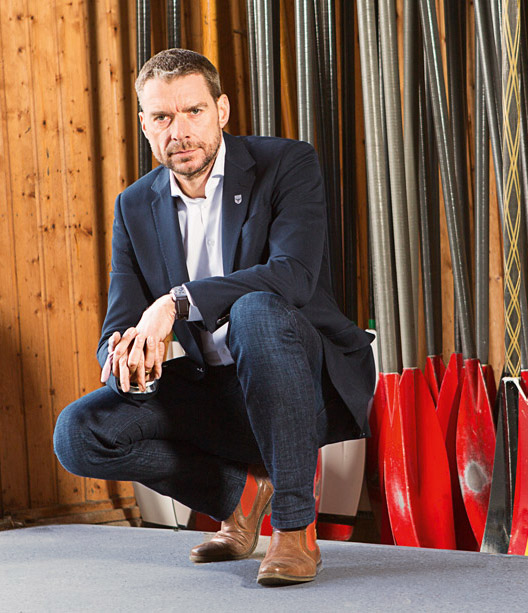 The Head Coach of the German Rowing Association is always on the go, traveling between twelve national training centers for professional rowers. The 49-year-old can look back on an illustrious career as a rowing coach. Among his accolades as a coach are a gold medal won by the men's quad scull team at the 2012 Olympic Games. He was appointed Head Coach in the same year.